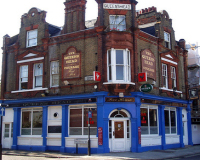 This is the pub where Charlie Chaplin's Uncle was landlord.

Description: One of the landlords was Charlie Chaplins Uncle Spencer, and Charlie is known to have frequented here. It was rebuilt in 1890 and Spencer WT Chaplin was the new landlord, and lasted until 1899.

During the war (about 1944) it changed it's address from 44 Broad Street to 71 Black Prince Road.

Is Chaplin's autobiography he recalls that his characteristic walk was based on the gait of a man called Rummy Binks, who took care of the horses here at the Queen's Head. The character of the Little Tramp hailed from this pub!

The Pillars of Hercules», 1.6km