Description: The house stands behind fifteen-foot high iron gates on land that was once part of a great forest, with wooded glades and lairs of wild beasts, deer both red and fallow, wild bulls and boars. Half a century before the Norman Conquest the land belonged to the Abbey of Barking. Over the years, King Henry Vlll hunted there, Queen Elizabeth I used it for entertaining dignitaries and King James I offered it as collateral to raise money to go to war. King Charles II had the whole area disparked and toward the end of the 17th century Lord Arlington was given one of the first private leases.

The land remained rural countryside until the 19th century when John Nash was Architect to the Woods and Forests Department, and friend of the Prince of Wales, the future King George IV. With the draftsman James Morgan, Nash began an elaborate plan for the development of the whole area. It consisted of fifty-six villas and a zoo - which is still there - but by the time George IV became King costs had skyrocketed and only eight villas were built.

In 1936 the house was partly destroyed by fire and it was bought by Barbara Hutton.

The world-famous heiress was then twenty-four years old and married to Count Haugwitz-Reventlow. Concerned about threats to kidnap their son Lance, they decided to give up their house near Marble Arch in London and look for something bigger and more secure. Three years earlier she had inherited some $40 million from her grandfather, Frank Winfield Woolworth, founder of the Woolworth store chain.

Friends suggested that St Dunstan's Villa might be an excellent site for the kind of home Barbara Hutton was seeking. Impressed by the peace and security of the grounds, she decided to buy and on August 10, 1936 the Crown Estate Commission gave permission for the old white stucco Regency villa to be pulled down and a red brick Georgian style house built in its place. 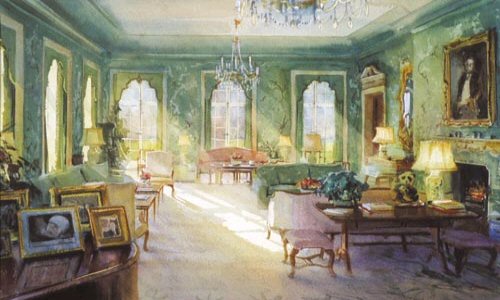 The Nose in Admiralty Arch», 2.2km