The site of the old White Bear coaching Inn.

Description: Now demolished (in 1870) and where the Criterion Restaurant stands, is the location of the White Bear Inn. It stood at least since the mid 17th Century.

In the latter part of the eighteenth century the White Bear was one of the most important coaching inns in the West End of London. Coaches left from five o'clock every morning for Dover, Margate, Ramsgate, Canterbury and Rochester, and there was also a night coach to Dover which left at half-past six in the evening. A very large number of West Country coaches which started at inns further east in London also called to pick up passengers at the White Bear.

This was where the Mozart family stayed in their first night in London April 23rd 1764. Wolfgang Mozart's father Leopold later wrote Thank God we have safely crossed, yet not without making a heavy contribution in vomiting. But we saved money which would have been spent on emetics. 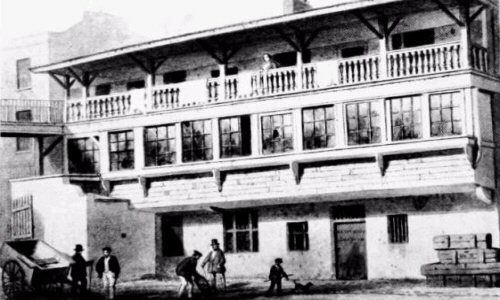