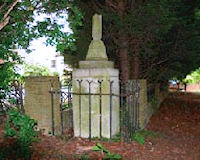 Monument against aerial bombing of Ethiopia back in the 1930's.

Description: By the side of the road, under the tree's and in front of the houses set back here is a memorial made by suffragette Sylvia Pankhurst. She lived from 1924 here for 30 years in a cottage where the houses behind now stand and all that remains in the statue she had sculpted for her. Well, it's a copy actually, the original was defaced and damaged by fascist sympathisers in it's first year 1935, and then stolen in 1936.

Sylvia was a well known suffragette but she also was a massive anti-war campaigner and socialist. She commissioned the sculpture to designer Eric Benfield with the help of funds raised by sympathisers - as part of a campaign against aerial bombing in Abyssinia, now known as Ethiopia.

The Grade II listed monument was unveiled by the Ethiopian representative in London, Lij Tasfaye Zaphiro. She eventually (1956) moved to Ethiopia and when she died in capital Addis Ababa, she was granted a state funeral.