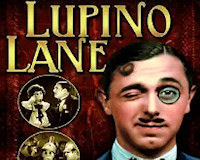 Description: This is where the great music hall and theatre star Lupino Lane (1892-1959) lived.

Born in Hackney Lupino, became a famous stage star as a child prodigy called Little Nipper. He went on to become a much-loved English actor and theatre manager.

He starred in silent films but made a real name and future for himself in the 1937 musical Me and My Girl which popularised the song The Lambeth Walk.

In 1946 he bought the shell of The Gaiety Theatre which was badly damaged in the Blitz. He never managed to open it again and it was demolished in 1956.