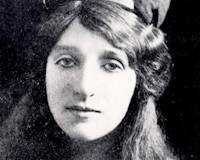 This is where EA Maskelyne and wife Cassie Bruce lived.

Description: This is where the greatest magic couple prior to Paul Daniels and Debbie McGee lived. In the golden era of magic, Edwin Archibald Maskelyne (1879-1920) part of the Maskelyne dynasty of celebrity magicians and singer Cassie Bruce (1875-1958) from a family of performers, were hot property.

In 1907 the Dundee Evening Telegraph and Post reported on their wedding: Wizards Wedding: Mr. Maskelyne to Marry the Disappearing Lady.

This afternoon at the Holy Trinity Church, Marylebone, will be celebrated the wedding of Mr E. A. Maskelyne, younger son of Mr Maskelyne, the famous magician, and Miss Cassie Bruce, the lady that has been connected with the Maskelynes for many years at the old Home of Mystery, the Egyptian Hall.

Mr Maskelyne and Miss Bruce first met each other when they were about six years old [Cassie was in fact nearly five years his senior] at a Christmas pantomime, and Mr Maskelyne said to a press representative:

I did not meet her after that for some time. I was busy studying Chemistry at Kings College for five years, but a year or two ago I left it to take up my position at the hall as business manager. There I met Cassie. We fell in love with one another, and I must admit that it was with some regret that I had during the course of the show to make her disappear.

A strange thing will take place at the wedding. After the ceremony we shall vanish, and next day reappear in Paris, where we shall spend our honeymoon.

One more thing. We have been engaged for five years, and I consider long engagements are the best.

Matinee With A Difference», 3.9km