The shop of Ignatius Sancho 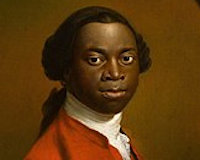 This is where the first African eligible to vote had a store.

Description: This is the location of Ignatius Sancho's (1729-1780) grocery groundbreaking store. His life is remarkable, after being born on a slave ship, Ignatius Sancho lived in Greenwich for much of his life. He was a trusted butler who became the first person of African heritage to vote in a British election.

He worked for three sisters in Greenwich before running away to live with and work for the Montagu family. Duke John Montagu, encouraged Ignatius to read and his education led to him becoming a respected composer and literate when it was uncommon.

In 1774 with help from Montagu, Sancho, suffering from ill health with gout, opened his very own greengrocery shop here. It offered merchandise, mostly produced by slaves, such as tobacco, sugar and tea.

The Letters of the Late Ignatius Sancho, an African, edited and published two years after his death, is one of the earliest accounts of African slavery written in English by a former slave.