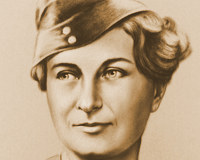 The only British woman to serve in the French Foreign Legion.

Description: This is where Susan Mary Gillian Travers (19092003) was born on 23rd September 1909, the youngest child and only daughter of naval officer, Captain Francis Eaton Travers and his wife, Eleanor Catherine.

Travers and family lived here until she was 12 and then moved to France in 1921, and she went on to serve in the French Red Cross as a nurse and ambulance driver during the Second World War. Prior to serving, Susan was a semi-professional tennis player.

She later became the only British military woman to serve in the French Foreign Legion, as an ambulance driver for the 13th Demi-Brigade. In May 1945, she formally applied to join the Foreign Legion but did not mention her gender - they accepted her, and de Gaul made her a General.

She also served in Vietnam, during the First Indochina War.

She was awarded the Medaille Militaire in 1956, and the Croix de Guerre and the Legion d'Honneur in 1996.

The shop of Ignatius Sancho», 2.0km