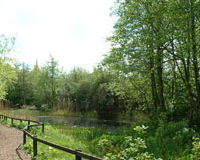 Super natural wildlife habitat in the middle of London.

Description: Round the back of Kings Cross and St Pancras station's this is a little gem of a natural retreat governed by the London Wildlife Trust.

It's a 2 acre nature reserve on the banks of Regent's Canal, home to reed warblers, kingfishers, swans and geese, mallards and other ducks, and also the occasional reed bunting.

It is also home to the rather rare and spectacular earthstar fungi.

It was created from an old coal yard back in 1984, opened a year later, and can accessed by thye marvellously ornate gate on Camley Street.

The Museum of Garden History», 2.8km