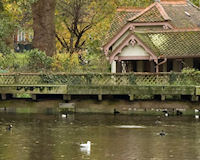 Description: Hidden from public eyes is Duck Island, dating from the original use of St James's Park as a hunting park.

Charles II converted it to a baroque park and created the post of 'Governor of Duck Island' and William III had the first lodge built.

It was destroyed in 1771 and rebuilt after 1840, as a Picturesque cottage designed by John Burges Watson. In 1953 it was nearly demolished but, instead, was preserved by Royal Fine Art Commission as a keeper's cottage.

In 1994 it became the headquarters of the London Historic Parks and Gardens Trust.

Sutcliffe Park and The Quaggy», 7.6km

The Museum of Garden History», 0.6km