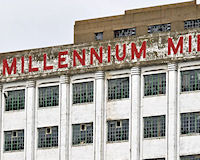 Description: This long derelict flour mill on the south side of the Royal Victoria Dock, between the Thames Barrier and the ExCel exhibition centre is finally undergoing redevelopment.

The industrial decay inspired backdrops in films and television shows such as Ashes to Ashes, Jean-Michel Jarre's Destination Docklands, and Derek Jarman's The Last of England. Jarman also filmed here in his music video for The Smiths single Ask.