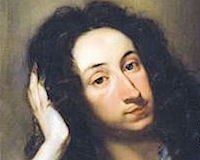 The house where John Evelyn died.

Description: John Evelyn (1620-1706) was an English writer, gardener and diarist whose diaries/memoirs cast considerable light on the art, culture and politics of the time (the deaths of Charles I and Oliver Cromwell, the last Great Plague of London, and the Great Fire of London in 1666). His contemporary Samuel Pepys was a lifelong acquaintance.

Evelyn and his wife Mary were outlived by just 1 of their 8 children, but it was his son John who rented this house here in about 1692. When John Jr. went to Ireland as Commissioner for Revenue in 1694, John Sr. stayed here making it his main home as the longer journey to the country took its toll on his aging figure.

On 27th February 1706 John Evelyn passed away here. His body was taken to his country residence, Wotton House in Surrey.

He was buried on the 4th March in the church where he had first gone to school in 1624.

The V&A have a magnificent cabinet made by Domenico Benotti of Florence, Italy in 1644. Evelyn had traveled extensively through Europe during the English Civil War where he picked it up. While in Florence, he ordered the pietra dura plaques directly from Benotti. When he brought it back he displayed it in his house here on Dover Street.