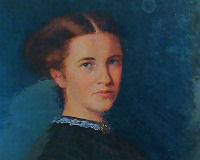 This is where Britain's first female doctor set up practice.

Description: This is where Elizabeth Garrett Anderson, the first woman to qualify as a doctor in Britain, lived from 1865 to 1874.

It is here that she set up her pioneering medical practice. It is a statement to her that she was the only female member of the British Medical Association (187392) for the next 19 years.

Elizabeth joined the Langham Place Group with her friend Emily Davies in the 1850s. They was at the centre of an emerging womens movement in Britain and Garrett began to campaign for extending women's employment.

After meeting Elizabeth Blackwell, an Englishwoman who had gained an MD in the United States, Garrett was determined to train as a doctor, sidestepping the ban on female medical students at universities and hospitals by studying privately.

She also exploited a loophole that allowed her to qualify as a Licentiate of the Society of Apothecaries in 1865, thus guaranteeing entry on the medical register.

She paved the way for the acceptance of women in the practice of medicine. The British examining bodies gradually opened their examinations to women and the London School of Medicine for Women was founded in 1874 with Garrett as a lecturer from 1875 to 1897 and served as its dean from 1883 to 1902.

Elizabeth Garrett married the ship-owner JGS Anderson (1838/91907) in 1871, moving three years later down the road to 4 Upper Berkeley Street. They retired to Aldeburgh, Suffolk in 1903.