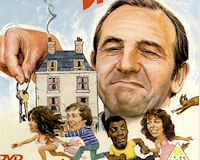 This is the location of Rigsby's House in the Rising Damp film.

Description: This 1980 film spin-off after the successful ITV comedy series had finished in 1978 placed the house here.

It follows bigoted landlord Rigsby (Leonard Rossiter) trying to woo spinster Ruth Jones (Frances de la Tour) even though she fancies one of the other tenants. The exact same plot as the series.

Richard Beckinsale, one of the tenants in the TV series passed away prior to filming, and was sadly missed. Christopher Strauli and Denholm Elliot were added to the previous cast which featured the superb Don Warrington.

Not only was the exterior filmed here, but a lot of the interior action was filmed here too, as the house was vacant.

Cooper always won them over», 10.km