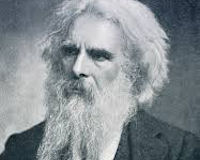 Description: Edward James Muggeridge (1830-1904) was born and raised here by the Thames. He was an English photographer, renowned for his pioneering work in early photographic studies of motion, and groundbreaking work in motion-picture projection.

In 1872, the former governor of California, Leland Stanford, hired Muybridge for some photographic studies to solve a popularly debated question of the day. Whether all four feet of a horse were off the ground at the same time while trotting, which he proved.

In 1874 he shot and killed Major Harry Larkyns, the lover of his wife, but was acquitted by jury on the grounds of 'justifiable homicide'.

In 1894 he returned to Kingston Upon Thames to retire, and died of prostrate cancer in 1904.