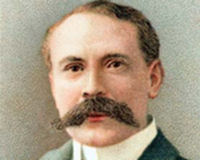 This is where composer Sir Edward Elgar lived.

Description: This is the Norman Shaw designed house where composer Sir Edward Elgar lived between 1911 and 1921.

Having been married in Brompton, they retired to Hereford before the lure of Principal Conductor with the London Symphony Orchestra was offered to him in Spring 1911. During negotiations to buy the house later that year, Elgar decided to rename it Severn House before he'd even moved in!

It is believed that he composed The Crown of India, The Music Makers, Falstaff, and The Spirit of England on the previous house that stood here called Kelston.

The house was huge and Elgar sold his violin to pay for a billiard table. He had stables above which was his workshop.

In 1918 two policeman burgled the house stealing silver, fine clothes, and other items, but were caught and served 5 years.

After the war, fuel shortages meant it was hard to heat the house, and the Elgars fell out of love with the house. His wife Alice died here in April 1921 and he moved out on the 15th October.