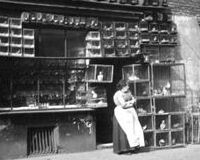 Description: The French Huguenots who settled in East London after the Revocation of the Edict of Nantes in 1685 introduced a custom of keeping canaries and various singing birds.

The demand created London's foremost bird market here on Sclater Street, and developed up Club Row to the North becoming the place to go for all manner of animals including monkeys and lion cubs!

Author George R. Sims said On Sunday nothing but bird-cages are to be seen from roofs to pavement in almost every house. At first you see nothing but the avenue of bird-cages. The crowd in the narrow street is so dense that you can gather no idea of what is in the shop-windows or what the mob of men crowding together in black patches of humanity are dealing in.

Animal rights campaigners eventually succeeded in shutting the market down, following stories of boot polish being used to mask sores and puppies being sold for medical research. In 1983 the government introduced a law outlawing the street sale of live animals.

The pub was part of the market too with traders stacking cages high inside for a pint and a puppy.

John Galt's photo (pictured) from about 1900 shows a typical Bird Seller at 97 Sclater Street, London, E1 6HR. Remarkably, the building is still recognisable today in its current guise. It was called Mrs G. Brown's Birds and was one of last remnants of the old bird market, floor to ceiling with canary cages. Brown's had been listed as bird traders here for generations.

Montagu Williams wrote in 1894 Sclater Street was soon reached, and at once I felt that the interest of the place had been in no way overstated. Here was to be seen the East End bird-fancier in all his glory, surrounded by his pets and his pals. This little Street in Shoreditch forms the common meeting-ground for buyer and seller, chopper and changer, and I can safely say that nowhere in London is there to be seen so interesting a concourse of people. They are all absorbed in birds and bird-life. If you stand at one end of the narrow street and cast your eyes towards the other extremity, the scene presented is one long line of commotion and bustle. One side of the crowded thoroughfare is entirely taken up with shops, in the windows of which are to be seen all manner of wicker and fancy cagesfrom the largest 'breeder' to the tiniest 'carrying cage' and birds of every description dear to the fancylinnets, mules, canaries, chaffinches, bullfinches, starlings, and 'furriners.' The cages are ranged in rows all round the wall.

The Rose and Punchbowl», 1.1km