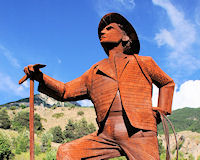 This is where pioneering mountaineer Edward Whymper lived.

Description: Edward Whymper (1840-1911) was one of Britain's mountaineering pioneers from the 1850s and 1860s, masterminding the first ascent of the Matterhorn.

Born in Lambeth he was a wood engraver and illustrator, travelling to Switzerland in 1860 on a commission from a publisher to sketch Alpine scenes.

He developed an interest in the new extreme sport of the time - mountaineering. In 1865, after eight attempts, he finally became the first person to reach the summit of the (previously thought of as impossible) Matterhorn.

On their return however tragey happened when the most inexperienced climber in the party, Douglas Hadow, lost his footing, a rope snapped, and he and three other men Ã¢â¬â Croz, Lord Francis Douglas and the Revd Charles Hudson Ã¢â¬â fell to their deaths. The disaster meant that Whymper faced much criticism

In 1906 he married Edith Levin and they moved into this house where they here they had a daughter, Ethel, who also became a mountaineer.