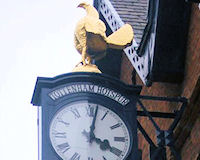 This is where Tottenham Hotspurs HQ have been for 120 years.

Description: In 1921 Tottenham Hotspur Football Club purchased the Red House at the front of the ground, which had been used as a hotel, restaurant and coffee house since its construction in the 1850's.

In 1886 they began using the Red House for their meetings and club matters and the building was finally bought by the Club after winning the FA Cup in 1921 and used as its main offices. Managers had their offices here - including Bill Nicholson.

Its address, 748 High Road, became the postal address for the ground (prior to that, 750 was used, which is actually the address of the White Hart Pub).

The distinctive Cockerel and ball on top of a clock was placed on the outside of the Red House in 1934 and became the iconic image of Tottenham Hotspur.

In 2008, as the club explored moving to a new larger stadium, Tottenham Hotspur proposed demolishing the Red House as part of the areas redevelopment. After campaigning by locals and supporters the building was saved and became a focal point of the development.