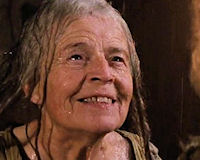 This is where actress Patricia Hayes lived.

Description: Comedy actress Patricia Hayes OBE (19091998) starred in many tv shows including Hancock's Half Hour, The Arthur Askey Show, The Benny Hill Show, and Till Death Us Do Part.

She can also be seen in feature films such as Willow, Goodbye Mr. Chips, The Neverending Story and A Fish Called Wanda.

Hayes was born in Streatham, and as a child attended the Sacred Heart School in Wandsworth. She began performing on the London stage at the age of 12 in The Great Big World at the Royal Court in London.

She went on to study at the Royal Academy of Dramatic Art, where she was awarded the prestigious Bancroft Gold Medal in 1928.

In 1987 she was awarded and OBE and the Clarence Derwent Award for Best Supporting Performance for her depiction of a deranged grandmother in Lorca's The House of Bernarda Alba.