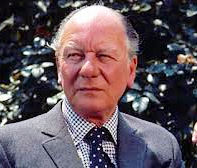 This is where Sir John Gielgud lived for most of his life.

Description: This is where legend of theatre Sir John Gielgud (and winner of an Oscar, a Grammy, an Emmy and a Tony!) lived between 1945 and 1976.

Gielgud's most notorious period came while he lived here. In 1953 he was knighted for services to the theatre, and a few weeks later arrested for a homosexual offence.

From the 1960s, he shared the home with his Hungarian-born partner, Martin Hensler. However when, after losing a treasured painting in a burglary in 1973, he decided to swap his house for a more relaxed abode in Wotton Underwood, Buckinghamshire.

Gielgud's role in Dudley Moore comedy vehicle Arthur, for which he won an Oscar, that he held in so little regard that he hid the golden statue in his en suite bathroom!

A blue plaque was unveiled here in April 2017 by his long-time friend and fellow actor Dame Judi Dench.