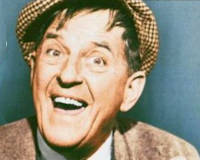 This is where comedy talent Stanley Holloway was born.

Description: Stanley Holloway (1890-1982), was cast as the irresponsible and irrepressible Alfred P. Doolittle in My Fair Lady on Broadway, in the West End and the 1964 film versions of the musical was born here in 1890.

After the war, he appeared in the classic film Brief Encounter and made films for Ealing Studios including Passport to Pimlico, The Lavender Hill Mob and The Titfield Thunderbolt.