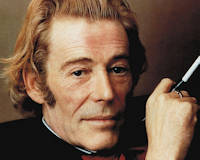 This is where hellraiser Peter O'Toole lived.

Description: Celebrated actor Peter O'Toole became legendary following his performance in the Oscar-winning epic Lawrence of Arabia in 1962. He returned to London after filming to find his wife Sian Phillips had bought this historic house.

However, his career fame was almost matched by his notoriety in social circles, often centering around his home here in Hampstead.

Moving to Hampstead in 1962 saw him become a regular face in the local pubs and restaurants but also opened Hampstead nursery school The Phoenix, supported the Royal Free Hospital, and campaigned for local MP's. He allegedly hired a coach with Guinness on tap to travel around the local pubs promising voters a free drink and ride if they voted Labour!

The house is Grade II listed Georgian townhouse dating back to 1722.