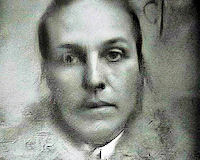 This is where murderer Amelia Sach lived.

Description: This was formerly Claymore House (note the blank house name after it was removed), the home of Amelia Sach, one of the first women hanged at Holloway Prison for murdering new born babies.

Amelia, in her early 30s in 1903, opened her house here as a 'lying in' home, a place where unmarried pregnant women could stay before giving birth and leave without the baby.

She put an advertisement in the local newspaper saying 'Accouchement, before and during. Skilled nursing. Home comforts. Baby can remain.' Once the child was born, Amelia would arrange an adoption for 25 and their offspring would start a new life with a 'well-to-do lady'.

However, her accomplice Annie Walters, evidently a highly disturbed 54-year-old midwife drugged the babies with a lethal narcotic and then dumped them on the streets of London.

After the police became suspicious of one death, the cause of another whose cause was asphyxia, enabled them to arrest Sach and Walters murder.

They were detained in Holloway Prison and hanged in the grounds. The case of the Finchley Baby Farmers was sensational in it's day and the resulting furore meant that the name of Claymore House had to be removed from the facade of the house to discourage ghoulish visitors.