Bride in the Bath murder 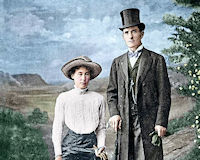 The notorious brides in the bath murder happened here.

Description: This is where George Joseph Smith, the notorious Brides in the Bath murderer drowned his third and final victim, Margaret Elizabeth Lofty, 38, in December 1914.

A verdict of accidental death was initially recorded but, thanks to a tip-off from an observant newspaper reader surprised to read of yet another 'accidental' bath-related death, police decided to investigate.

Lofty was newly married and, a few days before her passing, had willed everything to her husband, George Joseph Smith, 43. Smith was a serial bigamist, was also found to be a serial uxoricidist, in that he was guilty of the murders of all three of his wives all of whom died in their baths and all of whom had left him everything they owned.

Smith had been operating under several aliases and was convicted of three murders and hanged in August 1915. His last words were I'm innocent.

The road then was called Bismarck Road and renamed as anti-German tensions grew in the lead up to World War One.

The Assassination of Mr Thynne», 4.2km