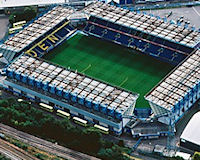 This is where Millwall FC play their home games.

Description: The Den is the sixth home of Millwall Football Club, and was formerly known as The New Den when it replaced The Old Den in 1993. It's built on a previous site of housing, a church and the Senegal Fields playgrounds.

It's claim to fame is that it was the first new all-seater stadium in England to be opened after the infamous Taylor Report on the Hillsborough disaster of 1989 bringing in a new era of crowd safety.

On 20th January 2011 the east stand of The Den was renamed as the Dockers Stand, paying tribute to Millwall's early history and support from the Thames dockers.

The south stand is oddly known as the Cold Blow Lane stand, the name of the road which led into The Old Den.

On TV The Den could be seen as the home ground of Harchester United in the TV series Dream Team. It also appeared in Primeval and The Bill and has been the location for advertisements by Nike (Take It To The Next Level) and Kit Kat (Cross your Fingers).