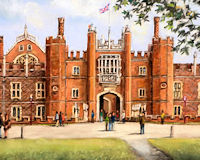 This is the historic Royal Palace in Richmond by the Thames.

Description: Hampton Court Palace is a splendid royal palace by the river in Richmond upon Thames, built originally in 1515 for Cardinal Thomas Wolsey. However, when Wolsey fell out with King Henry VIII after he failed to sway the Pope to annul his marriage to Catherine of Aragon, Henry took the palace from him. The palace became the royal palace of choice right up to King George II - the last monarch to reside here.

Today, the palace is open to the public and is a major tourist attraction, including a large number of works of art from the Royal Collection, its fine gardens, a delightful maze, historic real tennis court, and one of the largest grape vines in the world (planted by George III)!

The Hampton Court Maze is the oldest surviving hedge maze in the UK and was commissioned around 1700 by King William III and covers a third of an acre!

The palace has been given protection with a grade I listing, as does the early 16th-century tilt yard tower, the ancient walls, and Christopher Wren's Lion gate.

An Architect to the Royals», 11.km