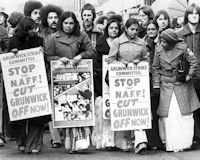 The scene of violent clashes in industrial dispute.

Description: This innocuous building in Dollis Hill was the epic-centre of an industrial dispute in 1976 over trade union recognition.

This office block, next to the station, was Grunwick Film Processing Laboratories, and they employed a great many Asian women on fairly long hours and pretty low wages often with compulsory overtime. MP Joe Ashton accused the firm of exploiting coloured workers.

Writer and political activist Amrit Wilson said they made use of the poverty of Asians and would blatently not entertain non-Asian applicants.

It all came to a head when, on Friday 20th August 1976, the company dismissed of Devshi Bhudia, here for working too slowly. Others supported her - Chandrakant Patel, Bharat Patel, Suresh Ruparelia, and Jayaben Desai, all walked out in support. One the Sunday they all picketed the gates here, and Citizens Advice told them to contact a union.

Strikes followed, along with violent clashes with police here in Chapter Road. The dispute was regularly featured on national television news.

The Battle of Cable Street», 7.8km

Embassy of Ecuador and Assange», 4.9km