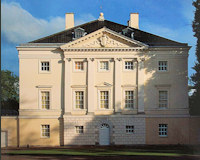 Description: The splendid Marble Hill, close to the Thames in Twickenham, was built in the 1720's for the mistress of King George II, Henrietta Howard (16891767), when he was Prince of Wales. She entertained many of the poets and wits of the age here including poet Alexander Pope and author Jonathan Swift.

The house and gardens were designed by Roger Morris and inspired by the 16th-century architect Palladio, and were intended as an Arcadian retreat from the crowded and dirty 18th-century London.

Its grand interiors have been exquisitely restored and recreated and include a fine collection of early Georgian paintings.

Marble Hill was saved for the nation by a 1902 Act of Parliament, following a fervent public campaign to protect the view from Richmond Hill.