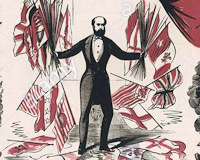 Description: This was the home of magician Henry Evans (1832Ã¢â¬â1905), aka Evanion. He was a conjurer, ventriloquist and humorist with a career spanning over fifty years.

Evanion performed in theatres and music halls across the country including performances for the Bishop of
Winchester, the Lady Mayoress of London, Queen Victoria at Sandringham, and the Prince of Wales (later Edward VII) and Princess Alexandra at Marlborough House. This led to him adopting the nickname The Royal Conjuror.

In his early years he travelled extensively with another ventriloquist, Newman, and his family, and by 1857 he was using the name Evan Ion, which within a few years was amalgamated into Evanion.

Evans was a legendary magic memorabilia collector, accumulating over 5000 items, which is in the British Library, known as The Evanion Collection. Harry Houdini also purchased a quantity of items specifically related to magic and illusions from Evans in 1904 and the collection gained further publicity.

The First ever London Theatre», 2.6km