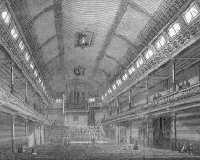 This is where St George's Hall, Home of Magic used to be.

Description: Here, St. George's Hall originally opened as a concert hall for the New Philharmonic Society on April the 24th 1867. Right from the start the Hall could also be used as a Theatre and in such a form it was known as St. George's Theatre. The first performance at the St. George's Theatre was 'A Woman's Whim' by Walter Stephens on the 3rd of December 1867.

In 1905 John Nevil Maskelyne, who had previously run the Egyptian Hall until it was pulled down in 1904, took over and reopened the St. George's Hall after making improvements and adding the house next door to the building. The name was changed again, this time to Maskelyne's Theatre of Mystery, opening on January the 2nd 1905 with 'The Coming Race' by David Christie Murray and Nevil Maskelyne.

Before the curtain rose on the drama, Mr. J. B. Hansard came through the inner proscenium, and in the dress of an ancient Crier, addressed the audience as follows:-'Oyez, Oyez, Oyez! It having been decreed that the ancient, and at one time refined thoroughfare, known as Piccadilly, shall henceforth be devoted to the consumption of grub-where you may upset your little Marys from the modest sum of one and six - science and art are constrained to seek a pure atmosphere. We have therefore turned our backs upon the old and dingy Egyptian Hall - we have left Isis and Osiris to the flesh pots, and have turned to St. George, purity, and truth. Be it known, therefore, that this hall, dedicated to our patron saint, shall henceforth receive the sub-title, 'England's New Home of Mystery.'

Various other changes of name on a variation of Maskelyne's Theatre followed and this new home of Magic became well known all over the world and very successful until in 1933 the BBC took over the building as a studio and concert hall.

The building was destroyed in World War II on the 10th of May 1941 and subsequently St. George's Hotel and Henry Wood House were built here in 1963.