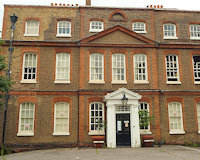 Historic mansion in Walthamstow once home to JFH Read.

Description: The Chestnuts, a rare survivor of what were once many Georgian mansions, was once home to composer and philanthropist JFH Read. Read was the founder in 1867 of the Walthamstow Musical Society, a local cricket pavillion, and he masterminded the build of the Victoria Hall, also in Hoe Street, in 1887.

It was sold to the Tottenham and Forest Gate Railway Company with demolition intended but it narrowly escaped as the final route for the railway line and station ran 500 yards to the west. They used some of the grounds but couldnt sell the house, so it became a mental hospital for women the Chestnuts Branch of the Brentwood Lunatic Asylum.

The grand grade II listed house was built in the 1747 for Thomas and Catherine Allen (see the dates on the rainwater collectors) and since being a private home has been an asylum, council offices, and adult training centre. Since the council moved their Adult Learning Services out of Chestnuts House it has been closed to the public.

The house, once with grand gardens and stables to the rear for carriages and horses, has given almost all its exterior space to the new primary school next door.

The Widest Pavement in London», 4.9km