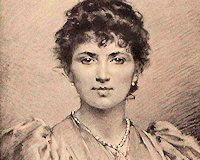 Description: Walthamstow-born (24th August 1855) food pioneer Agnes Marshall was the Heston Blumethal of her day - she is widely credited as being the inventor of the ice cream cone.

The 'Queen of Ices' was the Jamie Oliver of her day, opening with her husband a cookery school, launching a magazine, and selling a range of spin-off products from her shop here. Her books however featured cutting edge recipes designed to wow Victorian dinner tables. Recipes included cucumber ice cream, anchovy biscuits, turtle soup, escalopes of calfs head, cream of rabbit in aspic. Marshall's duck ice cream was an eye opener, requiring the following ingredients: foie gras, cayenne pepper, aspic and one of her molds, complete with realistic glass eyes.

She was granted a patent for an improved ice cream machine that could freeze a pint of ice cream in five minutes. And, quite Heston-like, suggested the use of liquid nitrogen in the making of ice cream.

It was on this spot that in 1883 she launched her ground breaking National Training School of Cookery. She sold skillets, ice cream molds and cooking ingredients like branded food coloring, baking powder (still a relatively new invention) and gelatin. She even created an employment agency so wealthy women could hire her graduates.

She was successful in her day, becoming the first owner of an electrified house in well-to-do Pinner. She died in Pinner in 1905, a year after falling from a horse, at the age of just 49.