Embassy of Ecuador and Assange 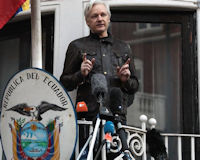 The home of Julian Assange for almost 7 years.

For almost seven years the embassy was famously home to the Australian activist, Wikileaks founder and journalist Julian Assange.

He entered the building on the 19th June 2012 claiming diplomatic asylum, which was duly granted by the Ecuadorian government on the 16th August 2012.

He had absconded in breach of bail after dismissal of his appeal by the Supreme Court of the United Kingdom.

On the 11th April 2019, Assange was arrested by British authorities who were invited into the embassy by the Ecuadorian government after the Ecuadorian President Lenin Moreno accused Assange of repeatedly violating the terms of asylum.