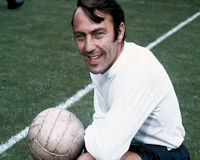 The sports shop once owned by Spurs legend Jimmy Greaves.

Description: Today it's still the local sports shop you go to to get a new pair of football boots (called today Rowe Sports) but it was once owned in the 1970's by Tottenham Hotspur and England goal machine Jimmy Greaves.

Legend has it, the shop was originally opened as Greaves & Penn while Jimmy was still playing and World Cup lifters Bobby Moore, Martin Peters and Geoff Hurst, actor Peter Fonda and comedian Marty Feldman all turned up cheered on by big crowds!

In 2012 David Beckham returned to his favourite childhood shop from LA Galaxy to pick up a football kit for one of his sons. As a budding player he would visit the shop with his father, who still lives in the area. The owner said 'I won't say what kit he bought but it wasnt the team he played for here.'