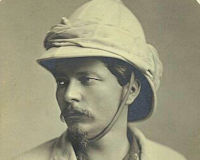 The London home of missionary Stanley and his wife.

Stanley became involved with African exploration in response to an assignment from the New York Herald to 'find Livingstone'.

He famously met Livingstone in October 1871, and they spent the following months exploring the area around Lake Tanganyika.

He returned to England and published How I Found Livingstone (1872) to great success.

Stanley's subsequent expedition to traverse Africa (1874 -77) settled many of the controversies over the Nile's source by circumnavigating Lake Victoria and charting the course of the Congo River.

He died here on the 10th May 1904. A blue plaque was erected here in 1987 by Greater London Council, to the right of the main door.