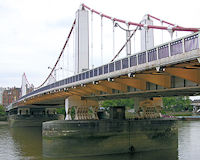 Description: Chelsea Bridge is a bridge over the River Thames in west London, connecting Chelsea on the north bank to Battersea on the south bank.

This was the site of an ancient ford, and the first bridge was called Victoria Bridge and opened in 1858 as a toll bridge. This wasn't popular and tolls were completely abolished in 1879.

The bridge was narrow and not well built, leading the authorities to rename it Chelsea Bridge to avoid the Royal Family's association with at the worst a failure and second - a potential disaster.

It was demolished in 1934 and replaced by the current structure, which opened in 1937 as the first self-anchored suspension bridge in Britain.

During the early 1950s it became a haunt for motorcyclists and adrenaline-fuelled races across the bridge. One meeting in 1970 erupted into violence, resulting in the death of one man and the imprisonment of 20 more.