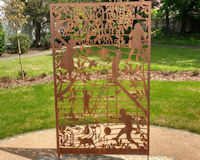 It has always been a place of play and was formally laid out as a public park in 1923 and retains the tennis courts today.

In February 2018 a lovely memorial screen for the Humanitarian Sir Nicholas Winton was installed.

In an operation later known as the Czech Kindertransport, Sir Nicholas found homes for the children and arranged for their safe passage to Britain.

The Museum of Garden History», 7.0km

The Birdman of Winchmore Hill», 6.1km