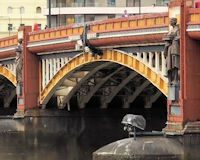 Description: Vauxhall Bridge is a Grade II* listed steel and granite deck arch bridge joining Vauxhall on the South side to Pimlico on the north.

Opened in 1906, it replaced Regent Bridge (later renamed Vauxhall Bridge), a toll bridge, itself replacing a former ferry at the start of the 19th century. It was part of broad plans to redevelop the South Bank and was the first in London to carry trams.

The bridge features four monumental two-ton statues, that are barely visible to bridge traffic, installed in late 1907. On the upstream piers are Pomeroy's Agriculture, Architecture, Engineering and Pottery, whilst on the downstream piers are Drury's Science, Fine Arts, Local Government and Education.

Despite their size, the statues are little-noticed by users of the bridge as they are not visible from the bridge itself, but only from the river banks or from vessels on the river itself. A rare treat for rare river users!