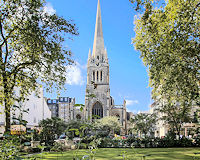 The church where Oscar Wilde got married.

The original St James's church was designed by John Goldicutt but was finished by George Gutch in 1841 after Goldicutt's untimely death.

Goldicutt's original neo-classical design in yellow brick was influenced by his travels in Italy, but Gutch changed the style to Gothic. 40 years later and the parish needed to expand so the church got redesigned and remodelled to be more Gothic by GE Street, who also reversed the chancel to face West. Two months after Street's also untimely death, the Princess Christian of Schleswig-Holstein laid the foundation stone for the new church on the 11th February 1882.

On 29th May 1884, the Irish author Oscar Wilde married Constance Lloyd here, a 2016 plaque by the Oscar Wilde Society inside commemmorates the event.

In 1940, St James's Church suffered considerable damage during the Blitz and the church crypt was used as an air-raid shelter. The church above was so badly damaged, the renovated church was only reopened in July 1958 by Princess Marina, Duchess of Kent.