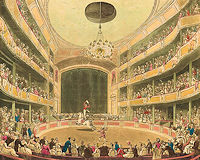 One of the earliest circus performances took place here.

After making the highest ranking officer Sergeant Major of Horse in the cavalry with the 15th Dragoons, they came up with the idea of giving shows on a field here known as Ha'penny Hatch.

Philip Astley rode three horses at a time, picked up handkerchiefs from the floor while cantering and did handstands in the saddle. Indeed, in newspaper adverts, they boasted 'upwards of thirty different feats, with former cavalry officer Mr Astley sword in hand, as in real action and Mrs Astley 'rides two horses with one foot in each saddle, and fires a pistol'.

The blue plaque here is on the London Underground electrical substation and visible from the end of Roupell Street by the bakery Konditor & Cook. Roupell Street and Cornwall Road are built on what was Hapenny Hatch. The plaque nicely features a horse and rider based on an early picture of Astley's Circus.

The Goons and Finnegan», 1.1km