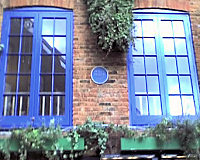 The editing suite's used by Michael Palin and Terry Gilliam.

Description: These are the studios where Monty Python's Flying Circus was produced.

In 1976 Michael Palin and Terry Gilliam bought these offices as Animation Editing and Recording Studios for an editing suite for the Python films and other projects.

They were sold in 1987, but a blue plaque remains.

The Goons and Finnegan», 1.2km