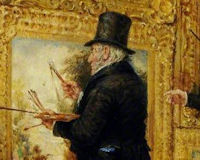 The house JMW Turner designed, built and lived in.

He designed a quiet retreat for himself, away from the pressures of the London art world, and provided a home for his father, old William, in retirement from his trade as a barber and wigmaker in Covent Garden. 'Old William' tended the Sandycombe garden and kept house here.

With Old William's declining health and changes in his own life, Turner sold the house in 1826 to his neighbour, Joseph Todd, the owner of Twickenham Park.

In World War II Sandycombe became a 'shadow factory', where airmen's goggles were made, but the heavy industrial sewing machines damaged the house badly and it fell into disrepair before being bought by Professor Harold Livermore and his wife Ann.

In the 1950s the building secured Grade 2* listing status. Today the Turner's House Trust are responsible for the management of this historic property.

Bridge That Curls Up Into a Ball», 21.km