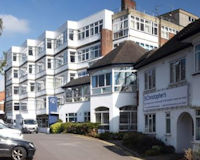 Description: St Christopher's was founded in 1967 by Dame Cicely Saunders - the first truly modern hospice. Its establishment made an extraordinary contribution to alleviating human suffering and has been a centre of innovation and insight ever since.

The first patient was admitted on the 13th July 1967 and the official opening followed shortly after on the 24th.

One of the first nurses was Florence Wald, who subsequently took its philosophies back to the United States to become the founder of the hospice movement across the pond.

Dr Robert Twycross was appointed Clinical Research Fellow by Saunders and his studies here on the effectiveness of morphine, diamorphine and methadone helped to standardize and simplify the management of cancer pain.