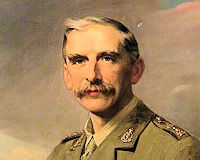 This is where the neurosurgeon and political reformer lived.

Description: Sir Victor Horsley (1857-1917) was a pioneering neurosurgeon and social reformer, who lived here in Bloomsbury between 1882 and 1885, close to University College Hospital where he worked.

He was one of the first acclaimed neurosurgeons, being the first to remove a tumour from the spinal cord, and the first successful example of binding an artery for a cerebral aneurysm.

Horsley's Wax was one of his inventions, an antiseptic compound of beeswax and almond oil still used today to stem bleeding from the cranial vault.

Horsley also played a leading part in the eradication of rabies in Britain, and supported the controversial muzzling of dogs which was rejected by parliament. He was a fervent campaigner for temperance, women's suffrage and sex education, and twice unsuccessfully tried to stand for parliament.

At the outbreak of World War I Horsely was 57 and still volunteered for active service, being sent to Dardenelles and later Mesopotamia. He campaigned passionately to improve conditions for the wounded and diseased troops, but sadly died of heatstroke on 16th July 1916 at Amara military hospital, near Baghdad.

The discovery of Penicillin», 1.7km