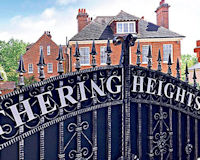 In 1978, aged just 19, she topped the UK Singles Chart for four weeks with her debut single Wuthering Heights, becoming the first female artist to achieve a UK number one with a self-written song.

In the mid 1980's she moved here and dubbed the house 'Wuthering Heights'.

She moved out in 2003 and in 2014 it went up for sale for 2.2m. The subsequent owner, Jackie O'Reilly, told The Telegraph that the singer was famously reclusive during her time there. 'I grew up in Eltham, and we always knew it as Kate Bushs house, and caught odd glimpses of her. But she clearly valued her privacy. The house is surrounded by large trees, to keep out prying eyes.'

The estate agent said that there was a rumour that she filmed one of her music videos in the bedroom.