The Tower of St Alban 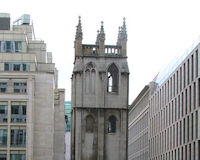 The church tower marooned in the middle of a road.

Description: One of the last few churches dedicated to St Alban, the medieval church that used to be here was rebuilt in 1634. This one was destroyed in the Great Fire of London in 1666. Then it was rebuilt to a Gothic design by Sir Christopher Wren.

Sadly it was severely damaged by bombing during the blitz in 1940 and only the 92-foot high tower survived after the ruins were removed in 1965.

Today it's a private residence marooned on a traffic island in Wood Street in the City of London.

The tower was designated a Grade II listed building on the 4th January 1950.

You may recognise the exterior, used as headquarters of the group AD1 in the 2009 film St Trinian's II: The Legend of Fritton's Gold.