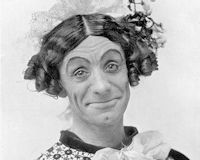 One of the Victorian ages most loved comedians.

He became increasingly popular during the late 1880s and 1890s, developing a music hall act of talking about life's mundane subjects, mixed with comic songs and surreal observations. He created a host of (mostly) working-class characters to illustrate his stories.

In 1901 he performed his Huntsman sketch for Edward VII at Sandringham and the king was so impressed that Leno became publicly known as the king's jester.

Such was his fame that he became one of the highest-paid comedians in the world in the late Victorian period, but suffered from various ailments and died aged just 43. He was one of Stan Laurels heroes of comedy.

A blue plaque was added to the frontage in 1962 by London County Council and after loss, reaffixed in 1979.