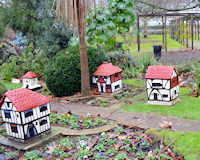 The award winning Vauxhall Park and its sensory garden.

Description: Vauxhall Park in Lambeth was opened on the 7th July 1890 by Albert, Prince of Wales.

The tiny 6-house mock tudor model village is the much-loved central focus of the Park, built in the 1940s by Edger Wilson, it is lovingly maintained. Check out the thatched roof and beautiful gardens around them.

The sensory rose garden is named after Henry Fawcett and his wife, the great Suffragist, Millicent Fawcett, who lived opposite the park. They campaigned for the this park to remain for the use of the residents of Vauxhall and it was opened by Millicent after Henrys death. Henry was blind and fragrant roses were one of his great loves!