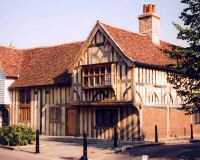 Description: The timber-framed Ancient House (formerly the White House) has parts dating from the 15th century, with a west wing rebuilt in the 16th. It sits opposite the exquisite St Mary's Church and in recent times became a bookshop and was completely renovated recently and is now rentable.